Why has economic growth stalled, despite the professed (and no doubt sincere) desire of government officials to stimulate it? We can get some insight from evolutionary theory.  Like biological ecosystems, economic ecosystems are interlinked, and constantly adapting and changing. Similar to evolutionary pressure in the biological world, competitive pressure in a market economy rewards innovation. It motivates entrepreneurs to fill new niches, redirect resources to their most valued use and help the economy adapt to changing conditions. Hanauer & Beinhocker observe that “the economy is a complex, dynamic, evolutionary problem-solving system—more like an interdependent ecosystem than an efficient machine.”

Innovation is an adaptive, selective process

In an empirical attempt to understand the innovative process, Youn et al examine U.S. patent records from 1790 to 2010, and identify three forms of innovation. The first, the creation of new technological capabilities, which they call the “building blocks to be combined,” are analogous to DNA. While these have significantly slowed down over the past 200 years, they find that, by combining these building blocks, two other forms of innovation are flourishing. They call these “‘exploitation’ (refinements of existing combinations of technologies) and ‘exploration’ (the development of new technological combinations).” Despite the “very reduced rate at which new technologies are introduced,” they find “the generation of novel technological combinations engenders a practically infinite space of technological configurations.” Like biological evolution, “the success of an adaptation depends on the order in which it follows other changes,” and is “ultimately determined by selection.”

The parallels between economic systems and biological systems are relevant for understanding the effect of government regulation on economic innovation and human prosperity. Polanyi observed:

Wherever we see a well-ordered arrangement of things or men, we instinctively assume that someone has intentionally placed them in that way. [Yet,] there exists another, less obviously determined type of order which is based on the opposite principle.”

Just as people resist Darwin’s theory of evolution and hold to a belief in intelligent design, many people look at the economic sphere and insist that a complex integrated society needs a complex, detailed government structure and oversight to regulate, plan, direct and constrain innovations—rather than appreciate that decentralized knowledge, dispersed among millions of people, generates an unplanned spontaneous order.

In the U.S., top-down “intelligent design” approaches to control the economic ecosystem take many forms, including subsidies, taxes, government programs and regulation. Regulations that constrain prices or the types of products that can be offered, dictate particular technologies, supplant consumers’ revealed preferences based on supposed “cognitive biases” or aim to be “precautionary” or “technology forcing,” all substitute centralized and binding human judgments and design for evolutionary processes. As a result, regardless of intent, such government interventions tend to hinder competition, innovation, and growth.

The table below contrasts some of the incentives provided by competitive market forces with those provided through regulation. 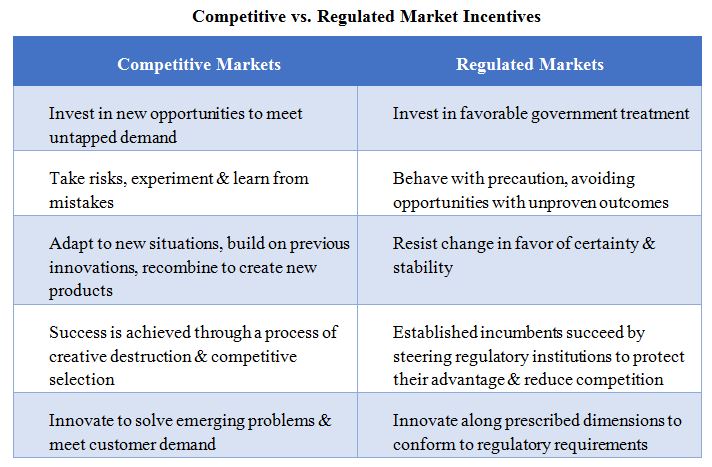 Competition is a powerful regulator

As the table illustrates, competitive pressures encourage innovation and growth, whereas regulatory pressures lead to less-productive activities, precaution and maintenance of the status quo. This often ends up protecting vested interests and harming consumers, because as Mannix observes, “competition is the most important regulator of our economy.”

It is ubiquitous, ever vigilant, and ever faithful to the interests of consumers. It constantly pursues both lower costs and higher quality in the goods and services we produce and consume. At the same time, it is never rigid: it is always open to new entry and to new ideas. It can be harsh, driving companies out of business without so much as a hearing; but it does so only when something better is there to replace them. It works without a queue for licenses, without an encyclopedia of rules, and without an army of inspectors.

Understanding the ecosystem-like nature of economies and respecting the evolutionary pressures that competition, choice, and decentralized decision-making can elicit can help identify better approaches toward regulation. We live in a diverse society made up of individuals in varied circumstances and with different preferences. Regulatory approaches at the national (or supernational) level that reduce competition, choice and feedback disrupt evolutionary processes, protect favored interests from challenge and make the economic ecosystem as a whole less able to adapt and innovate.