Research Brief: Why Should We Focus on the Form of Regulation?

Today, the GW Regulatory Studies Center published a report titled “The Relationship between Regulatory Form & Productivity: An Empirical Application to Agriculture.” This four-chapter, 154-page-long report details the research we conducted through a cooperative agreement with the U.S. Department of Agriculture (USDA). Although its major findings are derived from agriculture-related industries, the concept and framework for classifying regulations according to their forms have broader implications for examining the effects of regulation.

As required by executive orders, federal agencies are expected to estimate the benefits and costs of significant regulations before they are issued. However, scholars (e.g., Mandel & Carew 2013; McLaughlin 2018) have argued that the current practices of regulatory impact analysis overlook the economic effects of regulatory accumulation and interactions between regulations. Even when a new or revised regulatory action is estimated to generate net benefits, the entire body of regulations can have a cumulative effect that restricts economic growth (e.g., by inhibiting innovation and productivity) in unintended ways that are not fully considered by analyses of individual regulations.

What is a regulatory form?

A regulatory form is the particular policy instrument a regulation employs to achieve a desired end. In other words, it reflects the mechanisms through which a regulation achieves its intended outcomes (e.g., addressing a market failure). For example, regulation can set restrictions on prices or quantities of goods and services or set entry-and-exit barriers to control market power; regulation can prescribe specific technologies or procedures or merely specify a desired outcome to address negative externalities (e.g., pollution); regulation can also primarily address social problems by transferring resources among different parties in society.

As such, regulation can take various forms. Although some forms, such as command-and-control regulation and market-based regulation, have been discussed extensively in terms of cost-effectiveness or flexibility in the literature, no one has previously developed a framework for classifying regulations across policy areas by form in a systematic and comprehensive manner. Our research fills this gap by proposing the Taxonomy of Regulatory Forms—a three-tiered typology of regulation that starts with four broad categories of regulation (i.e., economic, social, transfer, and administrative regulation) and further breaks them down into 36 narrowly specified regulatory forms (e.g., price ceiling/floor, licensing, performance standards, subsidies, labeling requirements, etc.). 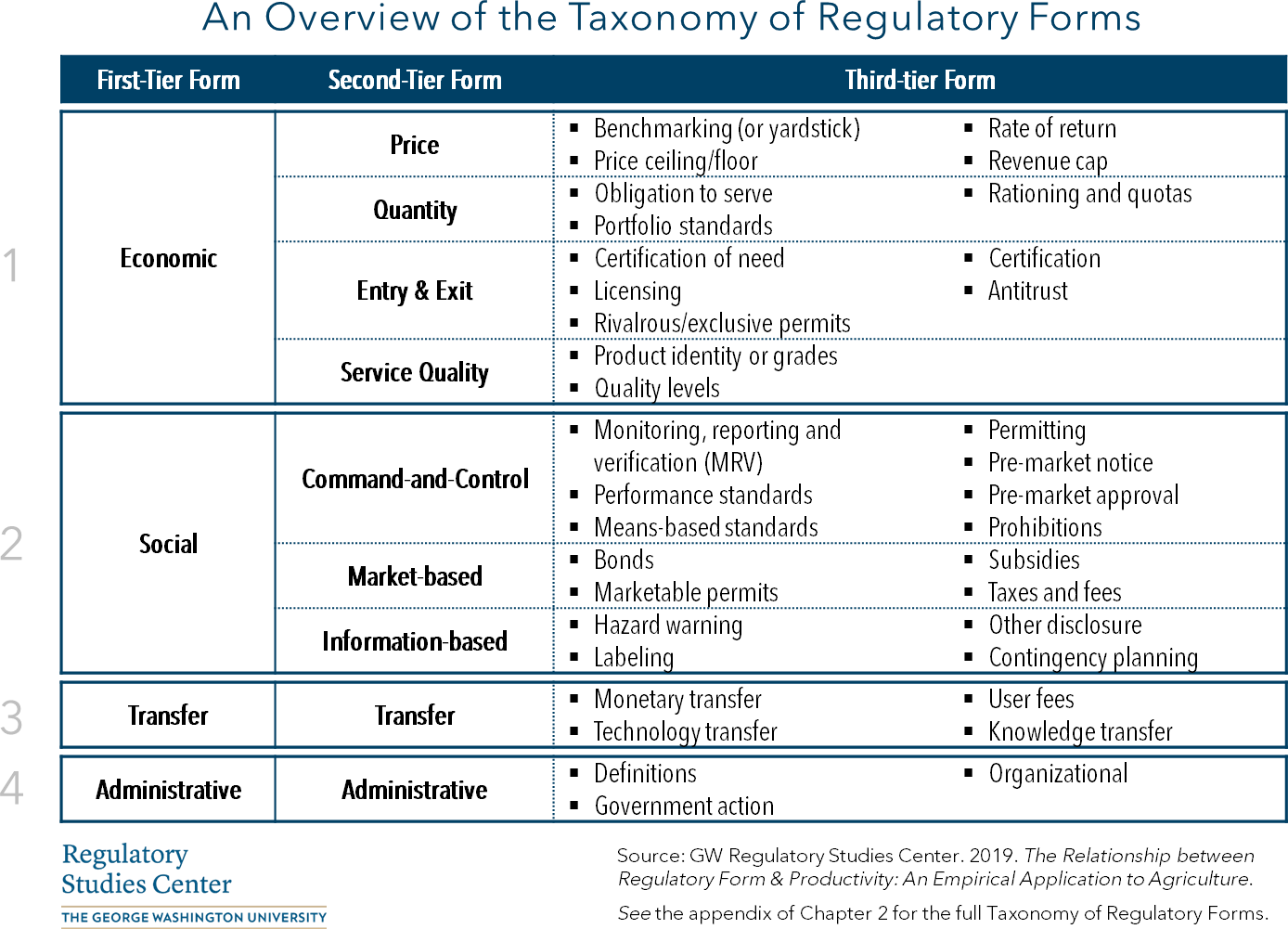 The forms of agriculture-related regulations

Although the Taxonomy is designed to be applicable across a broad range of policy areas, we apply it to regulations affecting agricultural industries in this report. Specifically, we classify a sample of 709 parts in the Code of Federal Regulations that are estimated to affect crop and animal production industries by the regulatory forms each part takes. The results uncover the relative prevalence of regulatory forms employed by the agencies issuing relevant regulations, as well as changes in the relative reliance on each form over time.

Regulatory forms vary across agencies and change over time. For example, command-and-control regulation is the dominant form of regulation promulgated by USDA, the Environmental Protection Agency (EPA), and the Food and Drug Administration (FDA). USDA also adopts a large number of transfer regulations, while EPA and FDA use more information-based regulations. Further, the 1970– 2017 period demonstrates an increasing emphasis on social regulation relative to a decreasing trend in economic and transfer regulation, as evidenced in prior research as well. Figure 1 illustrates such trends by showing the percentage of the word count in the CFR parts attributed to a form in the total word count of all CFR parts in the sample.[1] 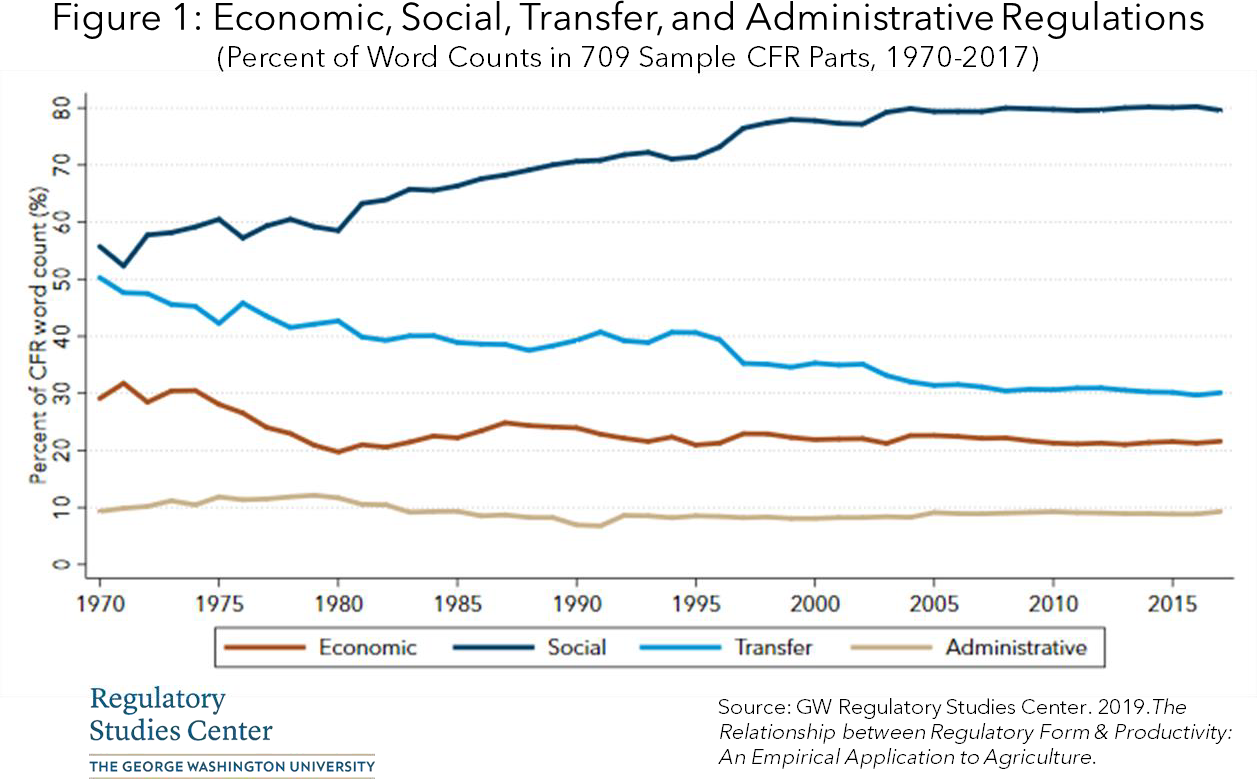 Does the form of regulation matter?

The variation in regulatory forms over time allows us to assess the economic consequences of different forms. Using a measure of the amount of regulation by form in the sample, as well as crop yield and natural disaster data related to 25 crop production industries for the period of 1970–2017, we examine the relationship between growth in different regulatory forms and growth in agricultural productivity.

The empirical results in this report are consistent with the existing theoretical understanding and empirical evidence on individual regulatory forms (e.g., Carrigan and Harrington 2015; Coglianese 2017; Klapper et al. 2006; Richards 2000). The report illustrates one way to assess the economic effects of different regulatory forms in a systematic manner. The research also has practical implications: it’s not just the amount of regulation, but also the form of the regulation that may affect economic growth. Regulatory reform could potentially be a “win-win” if decision-makers find ways to accomplish important public goals by replacing forms of regulation that diminish productivity with forms that have no effect or increase productivity.

[1] The percentages may not add up to 100 since a CFR part may contain multiple forms of regulation.