Evaluating Retrospective Review of Regulations in 2014

Every year, federal agencies issue thousands of new regulations that they estimate will have both benefits and costs for Americans. Despite the pace of regulatory activity, regulators seldom look back at existing rules to consider whether they are accomplishing their goals and resulting in the estimated public benefits. That’s why President Obama, like presidents before him, has encouraged federal regulatory agencies to review existing regulations and to “modify, streamline, expand, or repeal them in accordance with what has been learned.”

Because it can be challenging to evaluate ex post whether the intended outcomes of regulations are met, multiple government guidelines and proposed legislation instruct agencies to incorporate retrospective review plans into their proposals during the rulemaking process. To support this effort, the George Washington University Regulatory Studies Center examined 22 high priority regulations proposed in 2014 to assess whether they included plans for retrospective review, and provided recommendations for how best to do so. 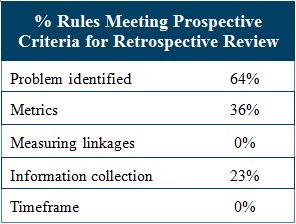 Overall, agencies are not doing a good job of planning prospectively for retrospective review. Of the rules we examined, not a single one included a plan for review.

In general, agencies were better at considering five less-impactful elements that could support future evaluation of the effects of their rules. These criteria include: identifying the problem the rule seeks to address, including metrics that can be used to measure the success of the rule, linking proposed standards to desired outcomes, collecting information to measure effects, and committing to a timeframe for reviewing outcomes.

Agencies were best at identifying problems, and worst at establishing timeframes and identifying linkages between proposed standards and their outcomes. Despite the importance of identifying how to measure the success of a rule, only 36% of rules included quantitative metrics. Overall, executive branch agencies like DOT, EPA, and DOE scored better on these criteria than independent agencies (such as CFPB and the NLRB).

Learning from Experience: Retrospective Review of Regulations in 2014