The charts on this page have been featured in a number of publications. Please contact us if you would like to use these files in your publication or presentation.

The effects of regulation—both benefits and costs—are difficult to measure, particularly when considered in the aggregate. As a result, analysts often turn to indirect proxies to understand the reach and impact of regulations over time.

The information here provides accessible charts and supporting data to better understand disparities and similarities across presidential administrations, and their cumulative approaches to implementing regulatory policy. Our team of policy analysts update these charts on a regular basis as new data are available.

If you would like to see us include other data points, or have questions about the information presented here, please email [email protected].

Professors E. Scott Adler (U. of Colorado-Boulder) Jeffery A Jenkins (U. of Southern California), and Charles R. Shipan's (U. of Michigan) 2021 textbook features our "Total Pages in the Federal Register" chart.

Former chairman of the Federal Reserve Board Alan Greenspan and the Economist's political editor Adrian Wooldridge's 2018 book features our "Pages in the Code of Federal Regulations" chart.

This graph presents the number of economically significant final rules published each presidential year. Economically significant rules are regulations issued by executive branch agencies that meet this definition in Executive Order 12866: “Have an annual effect on the economy of $100 million or more or adversely affect in a material way the economy, a sector of the economy, productivity, competition, jobs, the environment, public health or safety, or State, local, or tribal governments or communities.”

We present numbers by “presidential year” (February 1 through January 31) to understand priorities and activities during presidential terms.

If you would like to see the breakdown of Economically Significant Final Rules Published by Presidential Year for specific agencies, there are additional charts and data available for several agencies including the Dept. of Energy, Dept. of Transportation, Environmental Protection Agency, and the Dept. of Health & Human Services.

This graph tracks the cumulative number of economically significant final regulations published by executive branch agencies under different administrations, during equivalent months in office, from President Reagan to President Trump.

This graph shows the number of economically significant final rules by administration in their first year of office.

Rules Published in the Federal Register by Presidential Year

The Government Accountability Office reports on “major” rules published. The Congressional Review Act, passed in 1996, defines a major rule as “one that has resulted in or is likely to result in (1) an annual effect on the economy of $100 million or more; (2) a major increase in costs or prices for consumers, individual industries, federal, state, or local government agencies, or geographic regions; or (3) significant adverse effects on competition, employment, investment, productivity, or innovation, or on the ability of the United States-based enterprises to compete with foreign-based enterprises in domestic and export markets.” 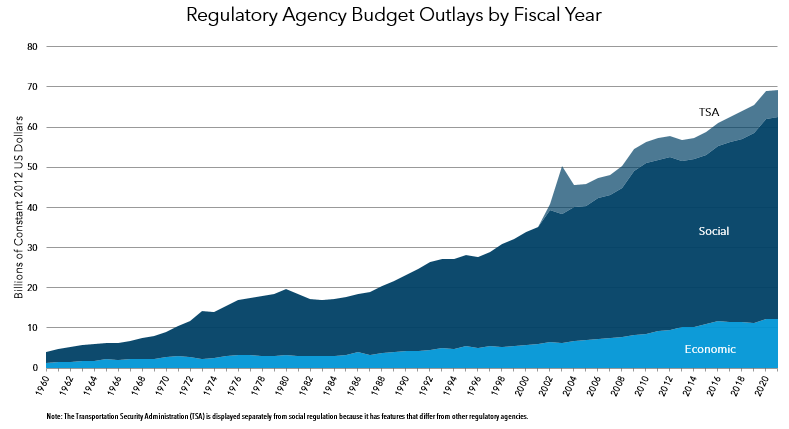 A chart on regulatory agency budget outlays by fiscal year from our annual Regulators' Budget report, co-published with the Weidenbaum Center at Washington University in St. Louis. 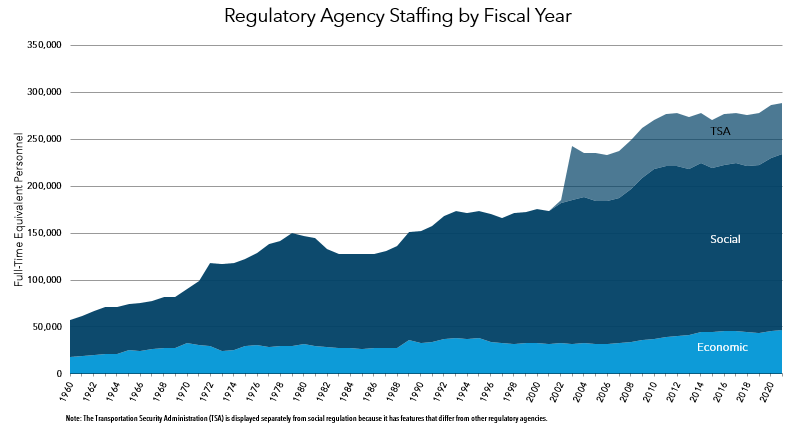 A chart on regulatory agency personnel by fiscal year from our annual Regulators' Budget report, co-published with the Weidenbaum Center at Washington University in St. Louis.

This graph presents the number of significant final rules published each presidential year. Significant rules (which include economically significant rules) are those regulations that meet one or more of the following definitions in Executive Order 12866: “create a serious inconsistency or otherwise interfere with an action taken or planned by another agency; materially alter the budgetary impact of entitlements, grants, user fees, or loan programs or the rights and obligations of recipients thereof; or raise novel legal or policy issues arising out of legal mandates, the President’s priorities, or the principles set forth in [Executive Order 12866].” We present numbers by “presidential year” (February 1st through January 31st) to understand priorities and activities during presidential terms.

The Code of Federal Regulations (CFR) is the codification of the general and permanent rules promulgated by the departments and agencies of the federal government. The number of total pages published in the CFR annually provides a sense of the volume of existing regulations with which American businesses, workers, consumers, and other regulated entities must comply.

Download the Data for the Code of Federal Regulations (CSV)

The number of pages in the Federal Register—the daily journal of the federal government in which all newly proposed rules are published along with final rules, executive orders, and other agency notices—provides a sense of the flow of new or changed regulations issued during a given period. These regulations might increase or decrease regulatory burdens, making this an imperfect—but frequently cited—measure of regulatory burden.

This graph tracks active actions (both regulatory and deregulatory) published in the semiannual Unified Agenda from Spring 2000 through Spring 2020 including pre-rules, proposed rules, and final rules.