Executive Order 13771, “Reducing Regulation and Controlling Regulatory Costs,” instructs agencies to identify two rules for removal for each new significant rule they issue after noon on January 20, 2017. Additionally, the EO instructs agencies to comply with a $0 regulatory cost cap for fiscal year 2017, meaning that the costs of new significant rules should be offset by the costs of the rules selected for removal or modification.

OMB’s status report lists each of the qualifying regulatory and deregulatory actions completed in FY 2017. The list includes three significant regulations, issued by DOE, EPA, and HHS, which are offset by 67 deregulatory actions to add up to $570 million in annual savings. While the 22-to-one ratio of regulatory offsets to new rules exceeds the two-for-one requirement, some of these deregulatory actions are extensions or delays of compliance dates, or withdrawals of proposed rules for which society has not yet borne any costs.

How will agencies meet these cost reduction requirements? In contrast to the Spring 2017 Agenda, the Fall 2017 Agenda shows which planned agency actions are regulatory or deregulatory, allowing observers to know how the Trump administration plans to implement its deregulatory policies. 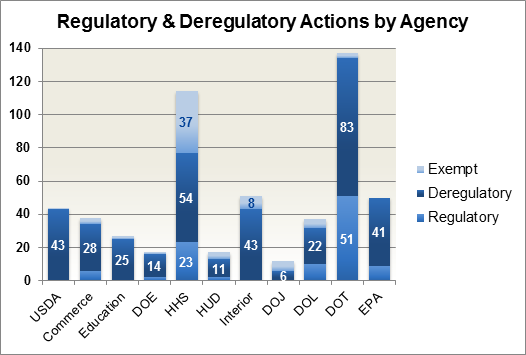 Among the top regulatory agencies selected for review, DOT and HHS have the most deregulatory activities planned in the next year, at 83 and 54 respectively. Several agencies, including USDA, the Department of Education, and Interior, have no qualifying regulatory actions planned. However, these agencies do have a number of planned regulations which are listed as being either partially or fully exempt from the two-for-one requirements of EO 13771. 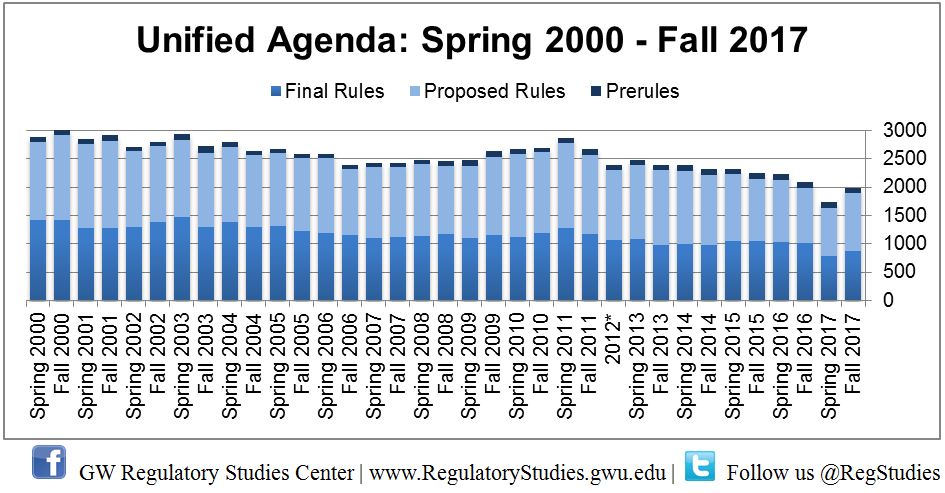