On Thursday, the Office of Information and Regulatory Affairs (OIRA) in the Office of Management and Budget released its biannual Unified Agenda of Regulatory and Deregulatory Actions. The Unified Agenda, which law requires to be published once in the spring and once in the fall, provides the public with a first glimpse at upcoming regulations. This report marks President Trump’s first Agenda, outlining the regulatory and deregulatory actions that agencies are planning to undertake in the next year in the context of President Trump’s Executive Order 13771.

Executive Order 13771, “Reducing Regulation and Controlling Regulatory Costs,” instructs agencies to identify two rules for removal for each new significant rule they issue after noon on January 20, 2017. Additionally, the EO instructs agencies to comply with a $0 regulatory cost cap for fiscal year 2017, meaning that the costs of new significant rules should be offset by the costs of the rules selected for removal or modification.

In February, the Office of Management and Budget (OMB) issued an interim guidance to agencies on implementing the new one-in-two-out requirement. This guidance instructed agencies to include in the Unified Agenda “all of the regulatory actions slated for repeal but not yet finalized,” meaning that this Unified Agenda provides a window to the administration’s deregulatory priorities.

The 2017 Agenda identifies 3,521 regulatory actions at different stages of development. Of these, 1,094 have recently been completed, and 696 are long-term. The Agenda classifies the remaining 1,731 as active regulatory actions, divided into three categories based on stage of rulemaking: final rule, proposed rule, and prerule stage. 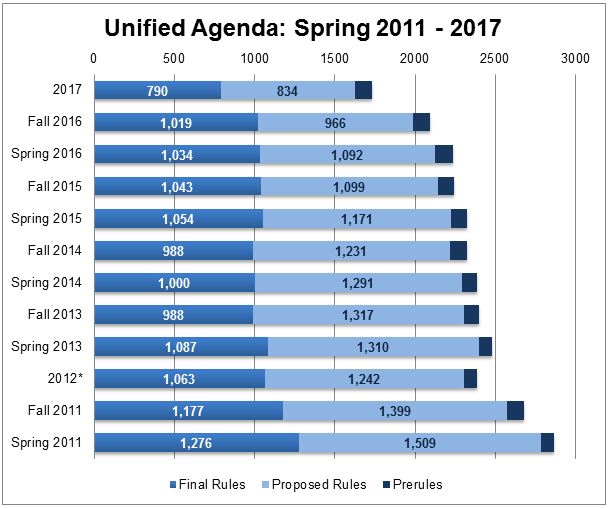 Despite these drawbacks, a clearer picture of the administrations deregulatory agenda can be gleaned by perusing the 1,094 completed actions. For example, 35% of the 66 completed actions listed by the Environmental Protection Agency are rule withdrawals. An additional five actions include regulatory delays or other deregulatory content.