The Supreme Court last week heard oral arguments in Michigan v EPA regarding “whether the Environmental Protection Agency unreasonably refused to consider costs in determining whether it is appropriate to regulate hazardous air pollutants emitted by electric utilities.”

The regulation being considered is a key part of the Obama administration’s environmental agenda and would require coal-fired power plant operators to install equipment to reduce mercury and other air pollutants.

Petitioners in the case, which were electric utilities and several states, argued that the EPA acted improperly in setting 2012 mercury and air toxics standards (MATS). They argued that the EPA estimated the regulations would achieve relatively small reductions in mercury emissions, valued at up to US$6 million per year, without weighing those benefits against costs, which the EPA estimated at $9.6 billion per year.

Section 112 of the Clean Air Act directs the EPA to issue regulations that are “appropriate and necessary” to control hazardous air pollutants, including mercury. Thus, one area of debate is whether a standard that imposes very large costs relative to benefits is “appropriate” under the meaning of the statute.

When and whether to calculate costs

In oral arguments, justices appeared to be divided on the case.

Justice Scalia argued that the statutory term in the Clean Air Act would be meaningless if it did not permit such considerations, and Chief Justice Roberts questioned why the government had deliberately tied its hands by refusing to consider factors relevant to the decision. Justice Breyer, whose writing has supported the use of benefit-cost analysis in government regulation, argued that “you have to take into account cost somewhere” but offered a novel theory that the EPA could consider costs at a later point by establishing sub-categories of compliance.

A related topic of debate was the level of the EPA’s discretion, with the more liberal justices arguing that the Court should defer to the EPA’s interpretation of its statute, under the established “Chevron deference” principle. The liberal justices also pointed to agency representations that, while the rule would be one of the most expensive ever issued, it would provide annual health benefits valued at up to $90 billion per year, which “outweigh its costs by between 3 to 1 or 9 to 1.” 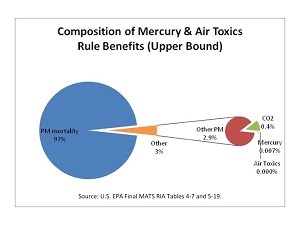 Chief Justice Roberts raised questions about the composition of these estimated benefits, however, since ninety-nine percent of them derive from reductions in non-hazardous emissions of fine particles known as PM2.5, which are not the focus of this regulation and which the EPA has authority to regulate more directly – and more cost-effectively – elsewhere. (See figures showing composition of reported MATS rule benefits.)

The direct health benefits EPA quantified stem from reductions in mercury emissions, which, when deposited in water can accumulate in fish and affect the IQ of children who consume large amounts of fish.

The EPA’s modeling indicates that, under the final rule, the average IQ of exposed children will improve by .002 points, or 511 IQ points nationwide, to which it assigns a dollar value ranging from $500,000 to $6.2 million per year.

To put this in context, the EPA estimated that its 1986 regulations removing lead from gasoline would raise the average IQ of exposed children by 4 points – a factor of 2,000 greater than the per child benefits EPA attributes to the MATS rule.

It’s worth nothing that the outcome of the Supreme Court’s decision in this case is unlikely to have an impact on legal challenges to the Administration’s efforts to regulate carbon emissions from power plants, as those depend on authority from other sections of the Clean Air Act which do not share the “appropriate and necessary” language in question here. However, the decision could have far-reaching impacts on American citizens.

Though the cost discussion focused largely on electric utilities’ compliance costs, the incidence of these regulatory costs will ultimately fall on households and individuals, who will face higher electric bills. These price increases could have a significant negative impact on the health and welfare of families, particularly those with low income.

Not only will these increases directly affect the affordability of such things as heat and air conditioning, but higher electricity prices will increase the costs of food and other goods, and divert scarce family resources from priorities such as their children’s education, or health care. Statistical research into this wealth-health tradeoff suggests that every $17 million increase in regulatory cost induces one fatality. If true, the high costs of the rule would translate into 565 fatalities per year.

The Obama administration issued the final rules on mercury emissions in December 2011, with a compliance date of April 2015. A ruling on the Supreme Court case is expected by July.

This commentary was originally published in The Conversation on March 31, 2015 under the same title.