Looking Ahead to Regulation in 2016

Although Congress will not likely enact new legislation in President Obama’s final year in office, regulatory agencies are a different matter. As Daniel Pérez observed, regulatory agencies have historically “dramatically increased the pace of their rulemaking as they rush to publish rules to finalize their regulatory agenda before the clock strikes midnight on their tenure in office.” Relying on Administration reports, Pérez predicts federal agencies will issue more than 75 economically significant final regulations this year. This commentary examines some of the most noteworthy of these upcoming regulatory actions.

In the past few years, the Department of Energy has proposed and finalized a slew of energy efficiency regulations limiting the amount of energy or water that can be used by appliances such as refrigerators, microwaves, and dishwashers. Despite the fact that these rules may have large costs for consumers, DOE is poised to issue a spate of new efficiency standards in 2016 including eight final rules and nine proposed rules. 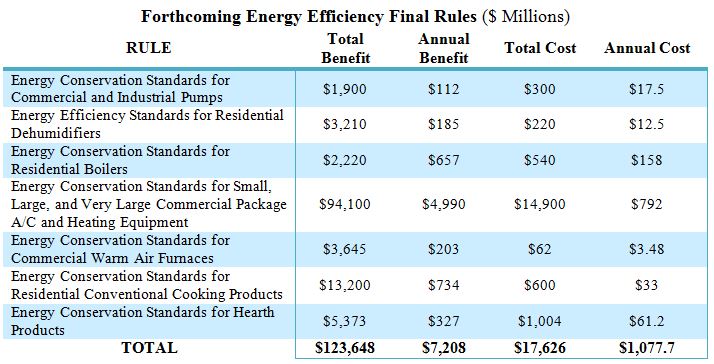 DOE estimates that the rules finalized in 2016 will yield  $123.6 billion in total benefits and $17.6 billion in total costs, but the vast majority of those benefits—and costs—stem from a single rule setting efficiency standards for commercial heating and cooling units. This rule is responsible for 71% of the total benefits expected from final efficiency rules in 2016, and 85% of the expected costs. Even more unusual is that DOE is issuing this rule as a direct final rule, meaning that it is bypassing the traditional notice-and-comment process before becoming law.

The Food and Drug Administration (FDA) and the Occupational Safety and Health Administration (OSHA) plan to issue a number of high-priority rules in 2016. Pursuant to the Food Safety Modernization Act of 2011, FDA plans to issue a final rule on the sanitary transport of human and animal food before April, in addition to a final rule regulating e-cigarettes and cigars. FDA’s e-cigarette rule is currently under review at the Office of Information and Regulatory Affairs (OIRA).

OSHA expects to finalize its permissible exposure limits for occupational exposure to crystalline silica by February – after almost 20 years of deliberation. Our analyses have found that OSHA bases its regulation on outdated safety information and ignores evidence that adverse health effects from silica exposure have declined significantly in recent years, both of which limit the likelihood that the rule will achieve its intended outcome. The final rule has been under OIRA review since just before Christmas.

While most of the Environmental Protection Agency’s (EPA) priorities for the Obama Administration have already been accomplished, the agency plans to take action on two significant rules in 2016: final fuel economy standards for trucks, and the proposed and final Renewable Fuel Standards (RFS) for 2017. EPA estimates that its final corporate average fuel economy (CAFE) standards for medium- and heavy-duty trucks will result in large net benefits for consumers; however, our analysis finds that the vast majority of these benefits are “private benefits” that may not actually represent consumers’ preferences. EPA expects to finalize its rule by July.

The RFS program requires refiners to blend specific amounts of renewable fuels into transportation fuel, such as gasoline and diesel. Our analysis of the RFS program has found that mandating biofuel quotas incurs large costs for consumers without benefiting the environment. The availability of new scientific, technical, and economic information shows that the RFS program does not work as it was intended to, and is likely causing significant environmental harm through increased greenhouse gas emissions and damage to waterbodies and ecosystems. EPA plans to propose the latest RFS in June and finalize its standards by December.