OSHA has struggled for over 40 years to develop regulations to address risks from exposure to crystalline silica, but its final rule is unlikely to have the beneficial effects the agency predicts. There’s no doubt that exposure to forms of RCS is associated with silicosis mortality and lung cancer, as well as other non-fatal effects, and OSHA is correct that the previous standards were based on obsolete sampling methods. However, OSHA’s rule doesn’t tackle the core problem.  The rule mandates various technologies and practices, but the greatest challenge to reducing risks is not that employers or employees are not motivated to take protective measures, but rather a lack of information, particularly information on the relative toxicity of different forms of silica.

Unfortunately, OSHA’s final rule will contribute little in the way of new information, particularly since it is largely based on data that are at least a decade old—a significant deficiency, given the rapidly changing conditions observed over the last 45 years.  According to a Center for Disease Control analysis, silicosis deaths declined dramatically between 1968 and 2002 (see figure). In announcing the rule, Secretary of Labor Perez acknowledged the long time the Department has spent developing the rule, but said “better late than never.” The problem is, more recent data analysis would likely show continued improvements and suggested alternative—more cost-effective—approaches. 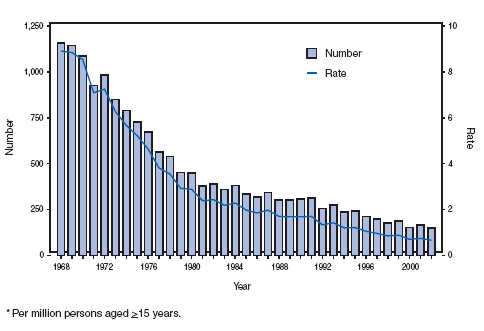 The rule’s procedural requirements will be very costly (more than $1 billion per year), but OSHA’s analysis simply assumes they will lead to workplace exposures below the proposed PEL. These assumptions are unsubstantiated, however, as OSHA is unable to support causal connections between specific requirements and reduced exposure or improved health outcomes. Perhaps more important, such standards provide no incentive for increasing knowledge about RCS hazards in the workplace; indeed, they may even discourage it by focusing attention on compliance with procedural steps rather than on harm reduction. Given the costs and time involved in changing OSHA regulations, the design-based standards are unlikely to encourage investigations by private parties into developing information as to the relative hazard of different forms of RCS, or practices likely to reduce risks.

In comments on the proposed rule and an article in Risk Analysis, Andrew Morriss and I recommended that to address the information problem that is at the root of continued risks from RCS exposure, OSHA should follow the guidance of Executive Orders 12866 and 13563 and focus its rule on performance standards rather than methods of compliance, and devise strategies that provide information, maintain flexibility for experimentation and encourage the generation of knowledge.

We also encouraged OSHA to identify the information it would need in the future to evaluate the effectiveness of the rule, once it is in place. Particularly given the lack of evidence that the rule’s elements will causally lead to reductions in risk, it is disappointing that OSHA does not commit to such an ex post evaluation the regulation’s effects. President Obama’s Executive Orders 13563 and 13610 call on agencies to provide a clear plan for conducting retrospective review, yet OSHA provides no information on how it will measure exposure and risk and how it will evaluate the effectiveness of the different components of the final rule.

After years of work on this rule, OSHA has missed an opportunity to address the lack of information which is the root cause of continued health risks from RCS exposure.