On the day before Christmas Eve, the Office Management and Budget (OMB) released its annual Draft Report to Congress on the Benefits and Costs of Federal Regulations (“the Report”), which provides a window into regulatory activity conducted by federal agencies in Fiscal Year 2015. The Report indicates that the new regulations issued between October 2014 and September 2015 have both higher costs and higher benefits than those issued in FY 2014, and that the Environmental Protection Agency (EPA) remains by far the largest contributor to both regulatory costs and benefits in this Report.

The 2016 Report provides an accounting of the costs and benefits of 21 major regulations issued in FY 2015, along with those of 130 major regulations issued in the past 10 years. According to agency estimates, these 21 major rules add up to $6.53 billion in annual costs and $45.43 billion in annual benefits (2010$). However, the report is limited in scope: these totals include benefit and cost data for only 28% of the major rules and less than 1% of all rules issued in FY 2015. Still, these data are a useful compilation of agencies’ ex ante estimates of regulatory benefits and costs. 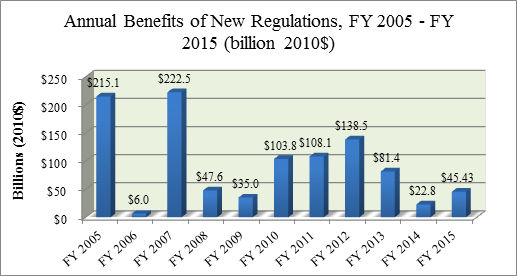 As can be seen in the figure below, two agencies, EPA and the Department of Transportation (DOT), contributed the majority of regulatory costs for the past 10 fiscal years. Including joint EPA and DOT rules (such as CAFE standards that increase vehicle fuel economy), these rules comprise 75% of total reported regulatory costs.

OMB addresses this trend in the Report, saying that “the rules with the highest estimated benefits as well as the highest estimated costs, by far, come from the Environmental Protection Agency and in particular its Office of Air and Radiation.” More specifically, OMB estimates that EPA rules account for between 61% and 80% of the monetized benefits and between 44% and 55% of the monetized costs of the rules included in the Report. OMB acknowledges considerable uncertainty in the benefits estimates that EPA reports for its rules with the highest estimated benefits, which range from $47 billion to $244 billion, a factor of more than five.