The 115th Congress has wasted no time in exercising its powers under the Congressional Review Act (CRA) to eliminate regulations issued by federal agencies during the Obama administration. Currently, eight joint resolutions of disapproval have passed the House—two of which were delivered to the president for his signature on February 06, 2017. President Trump signed one of these into law on February 14, 2017. This marks the first time in 16 years since Congress has successfully used the CRA to eliminate a regulation.

As we’ve previously discussed, the CRA includes several parliamentary mechanisms that allow Congress to nullify a regulation: 1) with only a simple majority in both houses of Congress and 2) with “fast track” provisions that prevent resolutions from being filibustered in the Senate. It is worth noting that, unless specifically authorized by Congress, disapproval under the CRA prohibits agencies from issuing future rules that are “substantially the same” as the disapproved rule. Until recently, only a single rule had been disapproved by Congress using the CRA.

Resolution of Disapproval Signed by the President

The bill signed by President Trump was House Joint Resolution 41 (H.J. Res. 41) This law disapproves a rule issued on July 27, 2016 by the Securities and Exchange Commission (SEC) titled “Disclosure of Payments by Resource Extraction Issuers.” CRS notes that this rule was mandated under Dodd-Frank and required “resource extraction issuers to disclose payments made to governments for the commercial development of oil, natural gas, or minerals.”

Bills Waiting for the President’s Signature

The other bill that has been presented to the president is H.J. Res. 38. This bill would disapprove a rule issued on December 20, 2016 by the Department of the Interior’s (DOI) Office of Surface Mining Reclamation and Enforcement titled the “Stream Protection Rule.” According to the Congressional Research Service (CRS), the rule addresses the impacts of surface coal mining operations on surface water, groundwater, and the productivity of mining operation sites. Reports indicate that the Trump administration recently cancelled a scheduled visit to Ohio, where the president had planned to “sign the bill and deliver a speech.”

The following is a list of all joint resolutions, to date, that have passed the House. Ultimately, the Trump administration’s deregulatory agenda combined with a Congress eager to rollback numerous Obama administration regulations may result in a historic use of the CRA. 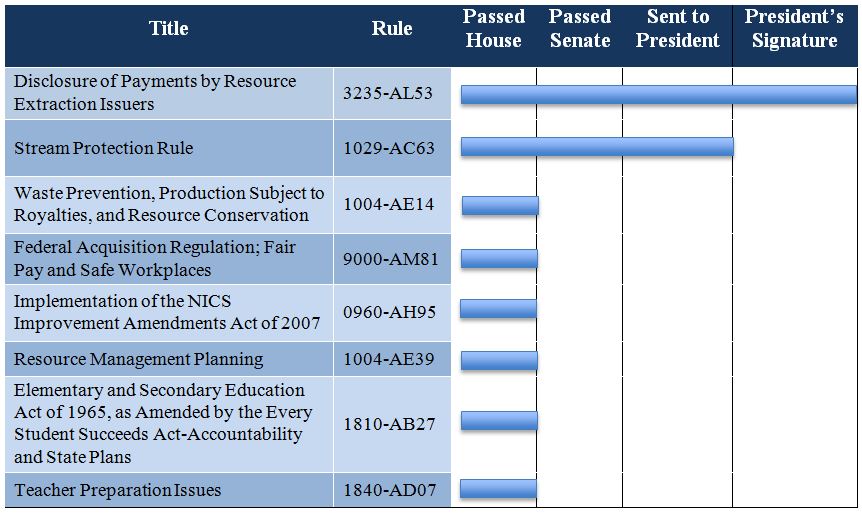