President Trump's State of the Union claim on Regulation: The 2017 Data are In

In his State of the Union speech last night, President Trump claimed “we have eliminated more regulations in our first year than any administration in history.” Assuming he is referring to previous presidents’ first years in office, comparisons of numbers of regulations repealed support his claim. Still, the historical data reveal some valuable nuance that informs evaluation of the administration’s efforts to reduce the burden of regulation.

The data for 2017 are in and our RegStats page contains updated graphs and figures presenting several interesting insights into the administration’s regulatory agenda and data to analyze the President’s oft-repeated claim that he is the most deregulatory president in U.S. history. Ultimately, the jury is still out on the latter claim since the process of deregulation—just like the regulatory process—takes time. It is a matter of months and years not days and weeks.

As we’ve described in detail, the Congressional Review Act (CRA) allows Congress to nullify final rules issued by federal regulatory agencies within a 60 legislative-day window after the rule was submitted to Congress. President Trump signed 15 resolutions of disapproval passed by Congress in 2017 (14 of which nullified Obama administration regulations). Prior to 2017, only a single rule had been disapproved since Congress passed the CRA in 1996. This supports the president’s claim of eliminating more regulations than previous presidents. However, a look at the potential cost savings tells a more nuanced story. Analysts estimate that use of the CRA to eliminate 14 Obama-era rules likely resulted in anywhere from $3.7 billion to $34.8 billion in cost savings. This broad range is the result of the difference between regulatory agency and industry estimates of cost. These are no small numbers.

However, it is worth noting the estimated effects of the only other successful use of the CRA to overturn a regulation: a single resolution of disapproval signed by President George W. Bush in 2001. This action nullified a regulation issued by the Occupational Safety and Health Administration (OSHA) during the final months of the Clinton administration (commonly referred to as the ergonomics rule). This resulted in anywhere from $4.5 billion to over $100 billion in cost savings—once again, depending on whether you use the agency or industry estimate. Whether or not the Trump administration presided over a historic use of the CRA depends on the metric used to gauge its effect. The results are further complicated by the fact that these estimates do not account for the potential benefits of these rules—which would be required to account for their potential net effects.

Regulatory Reform on the Existing Stock of Agency Rules

Our 2017 Regulatory Year in Review highlights several notable regulatory reforms that count towards the President’s claim of historic deregulation. This included signing Executive Order 13771 which directs agencies to eliminate two regulations for every one issued and Executive Order 13777 which requires each regulatory agency to designate a Regulatory Reform Officer  to lead a Regulatory Reform Task Force making recommendations for further reform efforts.

One striking example of the Trump administration’s deregulatory agenda is the Environmental Protection Agency’s (EPA) proposed rule to repeal its Clean Power Plan regulation targeting greenhouse gas emissions from fossil fuel-fired electric generating units. The EPA stated that this repeal would reduce compliance costs in 2030 by $33 billion. Insights from a panel of regulatory experts indicates that the jury is still out on the net effects of the administration’s regulatory reform efforts, but it is fair to state that evidence indicates that the Trump administration is pursuing deregulatory efforts more aggressively than its predecessors.

Several measures of the Trump administration’s current regulatory output are a clearer indication of his deregulatory efforts compared to other administrations. For example, during his first year in office executive regulatory agencies published only 17 economically significant rules—those estimated to have an annual impact of $100 million or more on the economy. This is only 50% of the economically significant rules issued during President George W. Bush’s first year (34) and substantially fewer than the 45 such rules issued during President Obama’s first year in office. Of Trump’s 17 economically significant rules, the Office of Information and Regulatory Affairs (OIRA) classifies three as deregulatory; another eight were issued by the Department of Health and Human Services—many of which implement requirements of the Affordable Care Act.

Looking at the total number of rules OIRA reviewed in 2017 indicates a similar pattern, with agencies under President Trump issuing just 52 significant rules compared to President Bush and Obama’s 233 and 227 rules, respectively. Finally, a look at the number of major rules issued in 2017—which includes regulations issued by independent agencies—from a database maintained by the Government Accountability Office confirms a reduction in regulatory output. In 2017, agencies issued 32 major rules—substantially fewer than those issued during the first years of Presidents Bush or Obama (52 and 105, respectively). It is uncontroversial to state that the Trump administration is adding fewer regulations to the current stock of rules on the books than his predecessors. 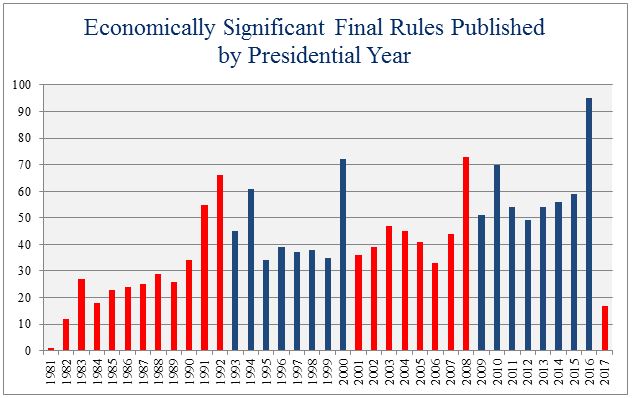 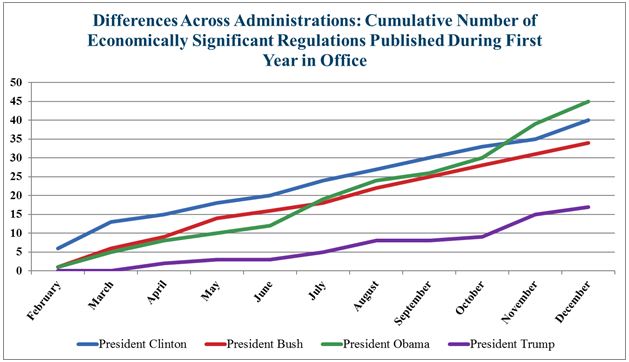 Our RegStats page contains additional data that allow comparisons across several other administrations. Ultimately, assessing President Trump’s deregulatory claims presents scholars with an opportunity to continue improving upon a notoriously difficult problem: finding useful ways to measure the effects and scope of regulation.