The effects of regulation on jobs have been a heated theme in contemporary political debate. In economic research, the empirical work suggests that regulation plays little role in affecting the aggregate number of jobs in the United States. However, the existing research has mostly focused on the volume or stringency of regulation. Little attention has been paid to regulatory uncertainty, and yet its impact on employment has a basis in the economic theory.

The literature on uncertainty provides theoretical explanations for how uncertainty affects the labor market. Bloom (2014) discusses several channels through which fluctuations in uncertainty can affect economic activity and growth. The channel that delineates a direct linkage between uncertainty and employment is the “real options” effect. The idea is that firms facing increased uncertainty become more cautious about actions like investment and hiring. For example, a firm may have the option to open a new store in an area; however, if the firm is uncertain about the future development plan of the area, it may prefer to wait for greater certainty. Therefore, this channel is also referred to as the “wait-and-see” effect.

Increased uncertainty makes firms more cautious about their decisions because adjustment costs of inputs make it expensive to reverse the decisions. Labor adjustment costs involve costs of recruitment, training, firing (e.g., severance pay), and productivity losses. Those costs are economically significant, estimated to be around 10 to 20 percent of annual wages.

Bloom et al. (2018) develop a dynamic stochastic general equilibrium (DSGE) model that illustrates the real-options effect of uncertainty shocks. In their model, they incorporate time-varying uncertainty, heterogeneous firms, and nonconvex adjustment costs in both capital and labor into an otherwise standard real business cycle model, which implies that increased uncertainty makes it optimal for firms to wait. The adjustment costs of labor lead to a “Ss” hiring policy rule: firms do not hire until productivity reaches an upper threshold (the S in Ss) and do not fire until productivity hits a lower threshold (the s in Ss). Higher uncertainty increases the hiring threshold and reduces the firing threshold, thereby widening the range of inaction. As a result, net hiring falls due to labor attrition (i.e., workers retire or resign without being replaced).

Some studies also incorporate heterogeneity in labor when considering adjustment costs, suggesting that the costs are different for workers with different characteristics. For example, it is more costly for firms to search for, hire, and train workers with advanced technical skills who are usually in shorter supply. The heterogeneous labor adjustment costs imply unequal real-options effects of uncertainty on employment with high and low levels of education. With increased uncertainty, firms are more reluctant to adjust the labor with higher education levels because the associated costs to reverse the actions are higher. Consequently, employment with lower education levels is likely to be more sensitive to an uncertainty shock. Sakutukwa and Yang (2018) provide empirical evidence in their analysis with a measure of macroeconomic uncertainty, which suggests that the uncertainty measure predicts the growth rate of employment with lower than a college degree relatively better than employment with a college or higher degree.

Similar to other types of uncertainty, regulatory uncertainty can have a real-options effect on hiring and investment. For example, a pharmaceutical company may choose to wait to develop a new drug if it is uncertain whether the drug would be approved by the regulator.

Policy-related uncertainty has gained increasing attention during recent years. A key contribution is made by the economic policy uncertainty (EPU) index developed by Baker et al. (2016). They construct the index based on the frequency of newspaper articles that contain terms related to economy, uncertainty, and policy. Their empirical analyses using the EPU index find that policy uncertainty shocks reduce employment, investment, and output, both at the firm and macro levels. Numerous studies have been published subsequently to develop similar news-based measures of policy uncertainty for other countries and for specific policy areas such as trade policy and monetary policy.

Comparatively, uncertainty surrounding regulatory policy has not been sufficiently studied or systematically tracked. Baker et al. (2016) build a categorical EPU index on regulation, but the measure is based on a limited set of terms to identify regulation-related news articles and has a clear emphasis on financial regulation.

In ongoing research, Tara Sinclair and I construct a new measure of regulatory uncertainty using text analysis of news articles from seven major U.S. newspapers. We identify regulation-related news content based on a large set of terms extracted from rule titles and assess the degree of uncertainty in the news content using a natural language processing technique. The resulting monthly index tracks regulatory uncertainty in the U.S. from January 1985 to August 2020. 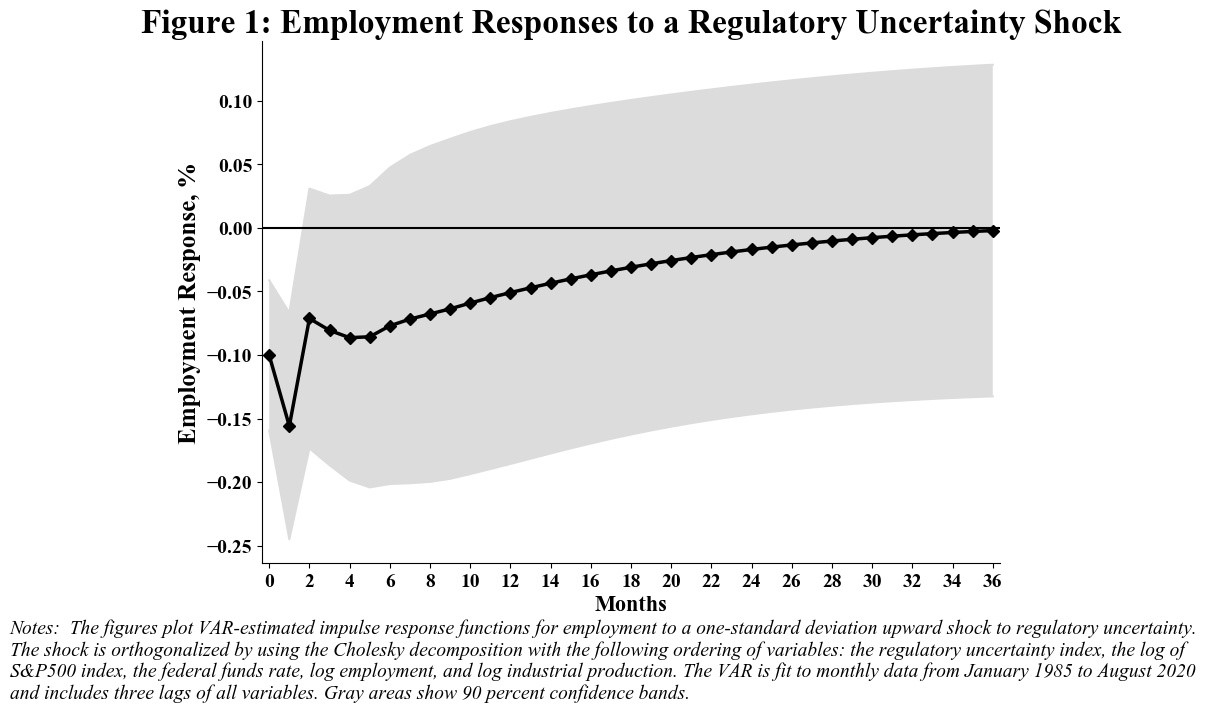 Using the regulatory uncertainty index from our work, I further extend the empirical analysis to examine how regulatory uncertainty affects employment of individuals with different education levels. I use the monthly employment data from the Current Population Survey. The data cover employment levels (25 years old and over) in four education categories: less than a high school diploma, high school graduates (no college), some college or associate degree, and bachelor’s degree and higher. 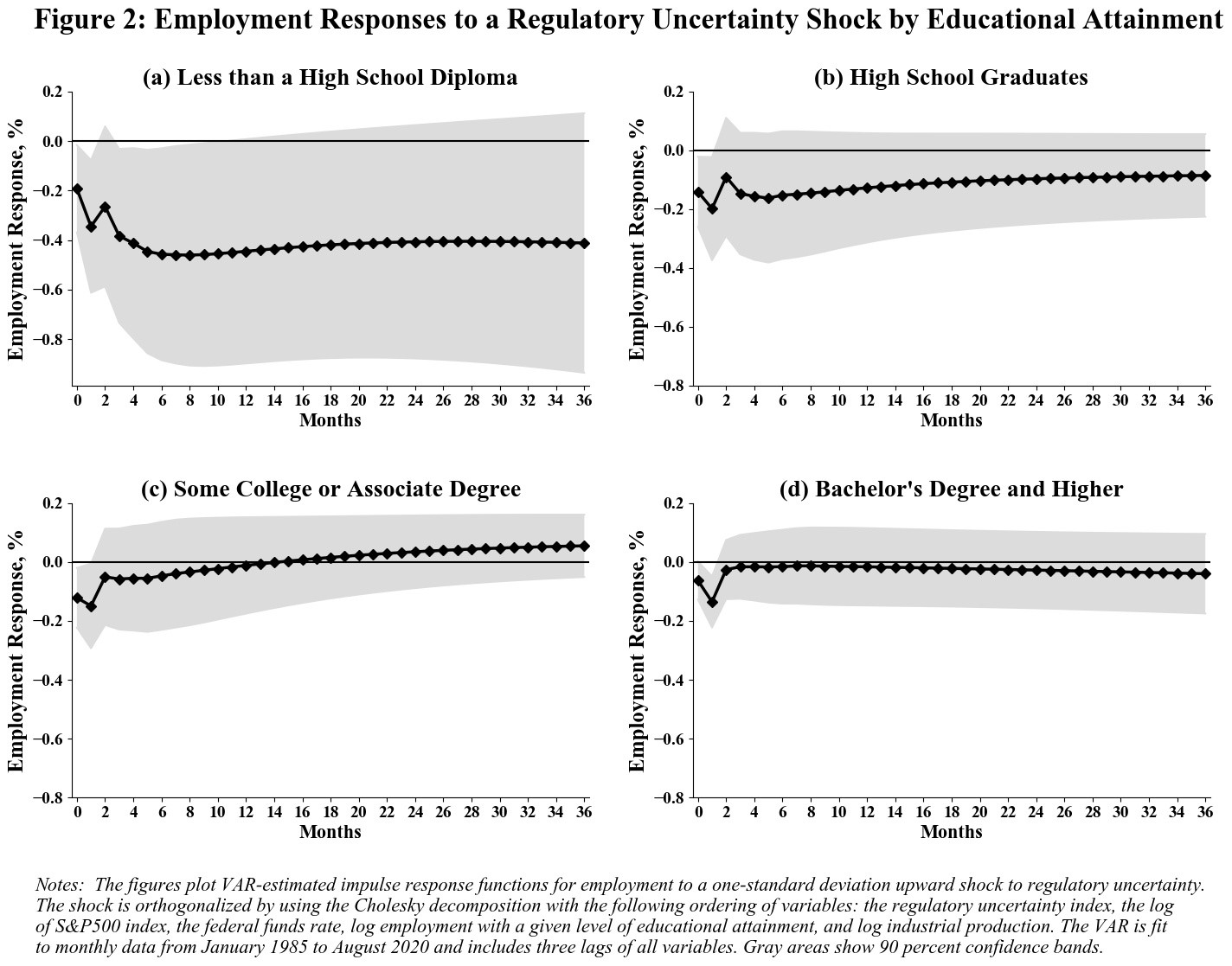 Economic theory suggests that increased uncertainty has a negative effect on employment through the real-options channel, and this effect is greater for lower educated labor than for higher educated due to heterogeneous labor adjustment costs. Building on my joint work with Sinclair, I extend the empirical analysis and show that the theory applies to regulatory uncertainty. Increased regulatory uncertainty reduces future employment, especially for workers with low education levels.