On the Thursday before the Memorial Day holiday weekend, the Office of Information and Regulatory Affairs released its semiannual Unified Agenda of Regulatory and Deregulatory Actions. The Unified Agenda, which is typically published once in the spring and once in the fall, provides the public with a first glimpse at upcoming regulations and, in a perfect world, offers citizens the chance to become involved in the rulemaking process before agencies make major decisions final.

In comparison to the Fall 2014 Agenda, this Agenda includes 155 fewer total regulatory actions, almost entirely from a reduction in the number of recently completed actions (a decrease from 629 to 477). As noted above, this Agenda contains almost the exact same number of active regulatory actions as the last Agenda, suggesting that the pace of federal regulations in the coming year will remain the same. The figure below explores how the current Agenda stacks up against recent Agendas. 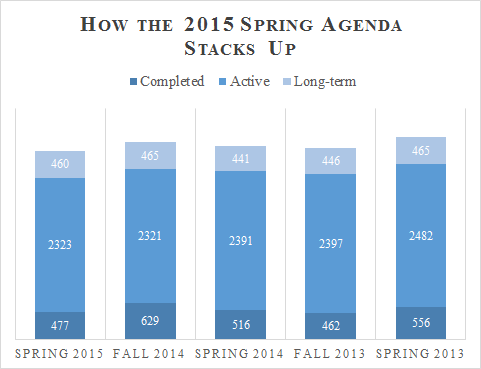 The Agenda also provides a count of the number of rules in the “final rule,” “proposed rule,” and “prerule” stages of rulemaking. The Spring 2015 Agenda lists 1,054 final rules and 1,171 proposed rules on which agencies will take action within the coming year. Of these active regulatory actions, 140 are listed as “economically significant,” as defined in Executive Order 12866. The figure below shows how the number of final, proposed, and prerule regulatory actions reported in this Agenda compared to the numbers reported in past Agendas. 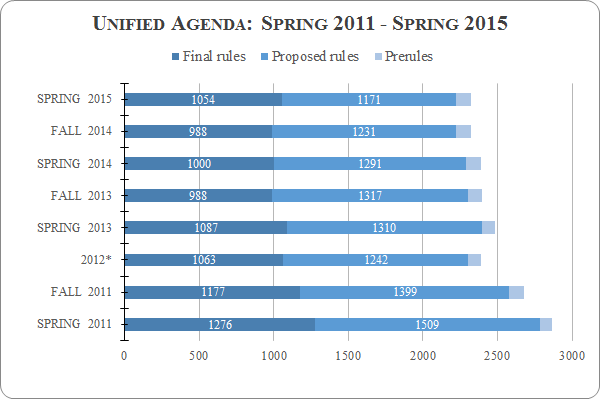 *In 2012, OMB released a single Unified Agenda for the entire year rather than two separate agendas.

These data show that the number of active rules in the current Agenda is roughly the same as the numbers in the past several Agendas. The exceptions are the Agendas from 2011, the first of which included 222 more final rules and 338 more proposed rules than the current Agenda. However, this decline is likely due to a memo issued by then-OIRA Administrator Cass Sunstein in 2012, which instructed agencies to list only the regulatory actions on which the agency “realistically intends to take action in the next 12 months.” This guidance limited the scope of what agencies included in their Agendas, which may explain the sudden decline in listings from 2011 to 2012.