The views of space and time which I wish to lay before you have sprung from the soil of experimental physics, and therein lies their strength.  They are radical.  Henceforth space by itself, and time by itself, are doomed to fade away into mere shadows, and only a kind of union of the two will preserve an independent reality.1

The race-to-trade2 in financial markets has escalated to the point where it collides with the physical limits set by the speed of light.  Regulatory agencies wishing to make sense of these high-speed markets must therefore make an effort to understand the nature of this ultimate speed limit, as described by Albert Einstein’s theory of special relativity, lest they try to impose regulatory constraints that are incompatible with those imposed by physical reality.

Some commenters, for example, have proposed that all automated financial markets should be synchronized to a master clock, failing to appreciate that – at the speed of today’s markets – there is no such thing as a master clock.  Space-time is structured in a way that makes absolute time an impossibility.  On both sides of the Atlantic, regulators are seeking to ensure that financial exchanges capture an audit trail that, after any market dislocation, will allow the regulators to reconstruct the sequence of events across linked markets.  This is possible, but only up to a point.  At the finest timescales, rapid events that take place in spatially separated trading centers simply do not have an unambiguous sequence.

In the theory of relativity an “event” has a precise meaning; it is a specific set of coordinates – a four-dimensional point – in space and time.  From any such point, one can imagine a burst of light traveling in all spatial directions.  The set of all points that can be reached by that burst of light is the event’s “future light cone” – so called because of its appearance when two spatial dimensions are graphed on the horizontal axes, and time is graphed on the vertical axis (See Figure 1).  The future light cone contains all events that are unambiguously subsequent to the event at the origin; a second light cone contains all past events.  In addition, there is a set of points that lie outside either the past or future light cones – these points are “causally disconnected” from event at the origin.  Thus the envelope of an event’s light cone is sometimes called the “causal boundary,” because if two events lie outside each other’s light cones, there can be no information flow, and thus no causal connection,3 between them. 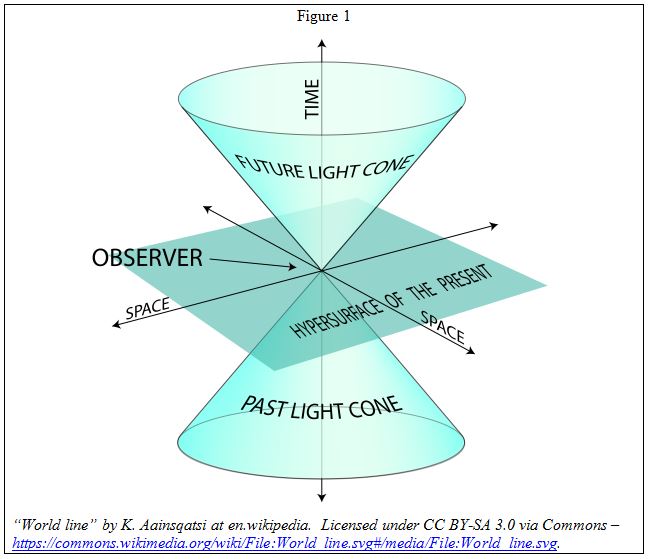 In Figure 1, the past and future light cones are absolute (i.e., not “relative”) in the following sense:  all observers will agree on the set of events that lie in the future, and those that lie in the past, relative to the origin.  In contrast, the plane labeled “hypersurface of the present” (also known as the plane of simultaneity) can only be defined relatively.  If two events lie outside of each other’s light cones, then different observers will see them taking place in a different order, and at least one observer will see them as simultaneous.  Thus simultaneity is a relative concept – it depends on the frame of reference of the observer.4  We can imagine a set of simultaneous events, or “the present,” but it is in fact an arbitrary concept.

So we see that we cannot attach any absolute signification to the concept of simultaneity, but that two events which, viewed from a system of co-ordinates, are simultaneous, can no longer be looked upon as simultaneous events when envisaged from a system which is in motion relatively to that system.5

How is any of this relevant to market microstructure?  High frequency traders (HFTs) who are attempting to gain advantage by racing orders across trading venues will skate ever closer to edge of the light cones that connect those events.  But no technology can operate outside the limits of the causal boundary.  And that provides one method of trying to protect large orders, and to avoid disclosing information to the HFTs.  A smart order router can break a large order into multiple components, and direct the components to multiple exchanges.  If it takes into account the latency of delivering those orders to their destinations, and controls the timing so that the arrival events lie outside each other’s light cones, each component order will be able to execute at its destination without being influenced by the existence of the others.

The IEX Group, which has an application to become a stock exchange pending before the SEC, mentions this technique in a patent application6: “Ensuring Simultaneous Information Delivery to Geographically Distinct Trading Systems” (para. 130):  “[M]any trading systems may target information delivery on a temporal plane.”  Note that IEX’s “temporal plane” corresponds to the plane labeled “hypersurface of the present” in Figure 1.  A smart order router does not have to hit the temporal plane precisely, however; it will suffice to keep all of the component orders causally separated – outside each other’s light cones.  The farther apart (in space) that the different trading venues are located, the easier it will be for an order router to achieve this causal separation, because the precise timing gets less critical.

At the speed of today’s financial markets, we need to be wary of applying overly simplistic idealized models of how trading should operate.  Economic concepts like the Efficient Markets Hypothesis – in an efficient market prices will “instantaneously” incorporate all available information – must be tempered by an understanding of the nature of space and time.

3 To be clear, if two events are “causally connected” in this sense, that does not imply actual causality.  It merely indicates that the events can be traversed at less than the speed of light – along a “timelike curve,” or worldline, in the parlance of special relativity.