Timeliness of OIRA Reviews: A Snapshot in Time

Centralized review of federal regulations by the Executive Office of the President has long been a feature of the U.S. regulatory system. The Office of Information and Regulatory Affairs (OIRA), pursuant to Executive Orders 12866 and 13563, coordinates interagency review of proposed and final regulations before they are published to ensure consistency with the President’s policy and resolve conflict between departments. Recently, however, concerns have been raised that these reviews were taking longer than had historically been the case, and that many of them were extended beyond the 90 calendar day timeframe envisioned in the Executive Orders.

While the length of a regulation’s review varies depending on its complexity, novelty, and level of interest, the reviews coordinated by OIRA have averaged 51 days from 1994 to 2011. Since 2011, however, average OIRA review times have trended significantly upward (see Figure 1). These unusual delays were highlighted in a report prepared for the Administrative Conference of the United States (ACUS) by Curtis W. Copeland, Length of Rule Review by the Office of Information and Regulatory Affairs. Copeland analyzed data through June 30, 2013, the same month a new administrator of OIRA, Howard Shelanski, was confirmed by the Senate.

Since becoming Administrator, Howard Shelanski has stated: “It is a top priority of mine to reduce the frequency of extended regulatory reviews and to work with agencies on rules that are already under extended review.”

OIRA reports data on its reviews on RegInfo.gov, including the number of reviews completed each day, and the number of days each rule was under review. Figure 1 presents these data by quarter, and shows that the average length of completed reviews began to increase significantly in 2012, and has not returned to historical averages. The longest review times began in the fourth quarter of 2012 and continue presently. It is important to note, however, because the length of review is reported only when a review is concluded, these statistics are a lagging indicator of the length of ongoing reviews. In fact, a rise in the length of review according to this measure may be an indication that OIRA is concluding reviews that have been underway for a long time. 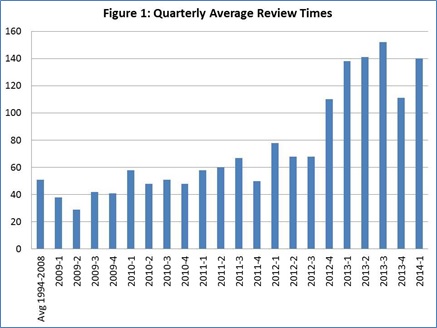 To gain insight into ongoing reviews, we can again turn to RegInfo.gov to get a snapshot of the number of regulations currently at OIRA and how long they have been under review. Figure 2 shows the number of regulations under review at three points in time: June 30, 2013, September 18, 2013, and March 25, 2014. The first two snapshots were presented in the Copeland report, while we pulled the March data from RegInfo.gov on March 25, 2014. 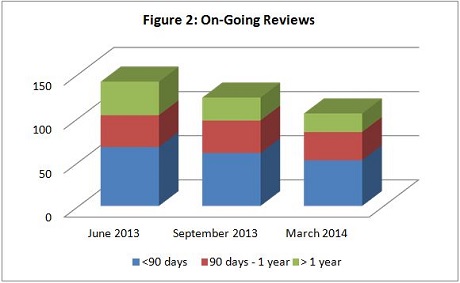 These data suggest progress in reducing the backlog of rules in interagency review. Between June 2013 and March 2014, the total number of regulations undergoing review has declined from 141 to 105, and, the number of regulations that have been pending for more than a year has dropped almost in half (from 38 to 21). However, some issues still remain. Fourteen regulations have been under review for over 2 years and one of those (an EPA proposal that would require reporting of nanoscale materials under the Toxic Substances Control Act) has been under review for over 3 years). These suggest conflicts with presidential policy that are not easy to resolve.