Trump Administration Picks up the Regulatory Pace in its Second Year

Just 10 days into his term, President Trump signed an executive order following through on his campaign promise to cut Federal red tape. Executive Order 13771 imposed new constraints on executive branch regulatory agencies, directing them to cut two rules for any new rule issued and to offset any costs imposed by new rules.1 Now, 18 months into the President’s term, we can check in on his regulatory activities. To do so, this analysis uses data from the regulatory review activities of the Office of Information and Regulatory Affairs (OIRA) in the Office of Management and Budget (OMB), which provides unique insight into executive branch efforts to make meaningful policy changes in the regulatory realm.

How Does the Trump Administration Stack Up? 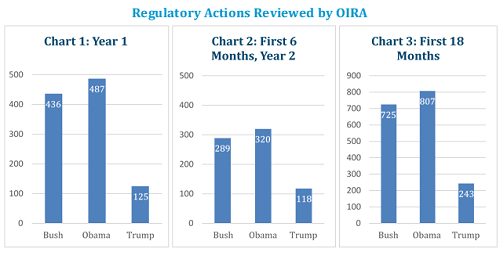 As shown in Chart 1, the number of regulatory actions that OIRA reviewed in Trump’s first presidential year2 declined dramatically compared to those of the two prior administrations. It was 74% less than the first year of the Obama Administration and 71% less than the same period in the Bush3 Administration.4