An initial look at the Agenda’s topline figures might suggest that agencies under the Trump administration plan to continue meeting their regulatory reform targets under EO 13771—collectively planning to issue approximately 2.2 deregulatory actions for every 1 significant regulatory action. However, a breakdown of actions by agency illustrates that this average is primarily driven by the performance of a few outliers with multiple agencies planning to regulate well beyond their 2-for-1 targets. Additionally, for rules expected to have the largest effect on society (i.e., $100 million or more in benefits and costs), agencies are on track to reverse course by issuing an average of 2 regulatory actions for every 1 deregulatory action.

The cumulative results of agency performance in implementing regulatory reform for FY 2020 won’t be available until OIRA releases its annual EO 13771 Report later this year. Nonetheless, the Spring 2020 Unified Agenda suggests that agencies have either run out of low hanging fruit with regards to deregulatory actions or have begun to regulate, on net, to implement the Trump administration’s remaining policy priorities.

Depending on the outcomes of elections in November, many of the rules listed in the Spring 2020 Agenda could face expedited elimination by the incoming Congress under the Congressional Review Act (CRA). Although the COVID-19 pandemic has created additional uncertainty regarding the start date for the review window, a recent estimate suggests that any rules issued after May 13 could be subject to disapproval.

The Spring 2020 Unified Agenda lists a total of 3,939 agency actions, 334 of which are classified as regulatory and 677 as deregulatory. The remaining 2,928 actions are exempt from EO 13771, classified as “other,” issued by independent agencies or otherwise not subject to the requirements of EO 13771. Of the total number of actions, 226 are economically significant.[1]

Actions in the Agenda are also categorized by their stage of development including: active (those with milestones expected within 12 months), long-term (those outside the 12 month window), and completed actions (which includes rules that are finalized or withdrawn). Of the 2,698 actions listed as active, about 22 percent are published for the first time in the 2020 Spring Agenda. 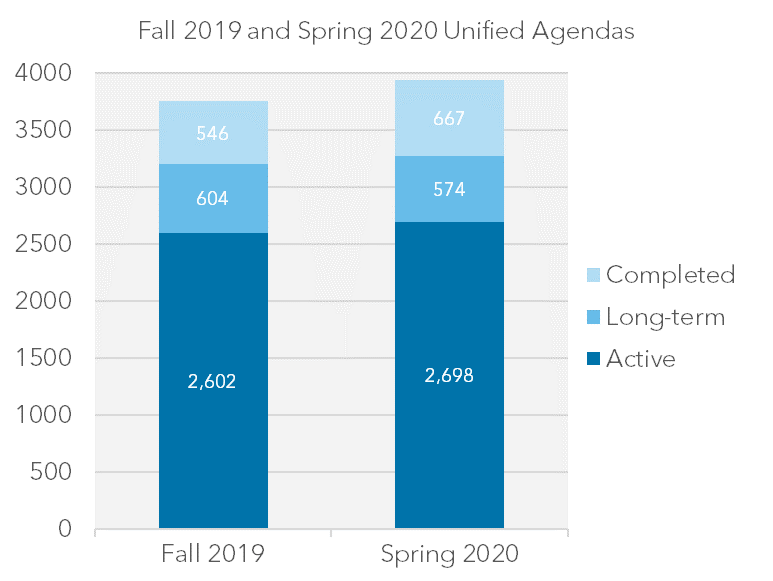 Regulatory and Deregulatory Actions by Agency 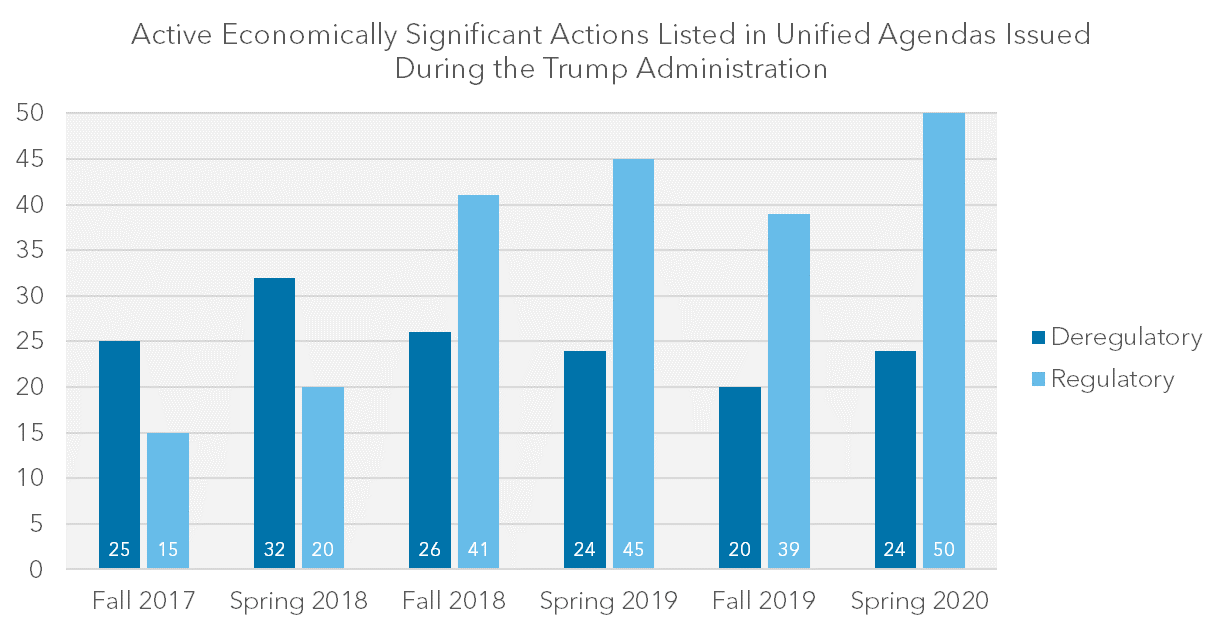 My colleague, Mark Febrizio, and I previously pointed out that the FY 2020 Regulatory Reform Budget was the first time that agencies were allowed to impose net costs via regulatory actions. At the time, the glaring outliers in the Report included a cost cap of approximately $35 billion allocated to DHS and the fact that a single action—the Safer Affordable Fuel-Efficient Vehicles Rule (SAFE) jointly issued by DOT and EPA—was responsible for generating the majority of deregulatory savings. In the absence of the SAFE rule, the administration’s regulations would cumulatively be estimated to add approximately $30 billion in new costs.

*Source: Reginfo.gov. Executive Departments and Agencies not listed above are required to comply with an incremental cost cap of $0.

The active regulatory actions listed for DHS and HUD in the Spring 2020 Agenda illustrate that more stringent regulation of immigration continues to be a priority for the Trump Administration. Economically significant regulatory actions by DHS include proposed increases to its U.S. Citizenship and Immigration Services Fees, and a proposal to eliminate regulatory provisions requiring the agency to respond to employment authorization applications submitted by asylum applicants within 30 days. The agency also plans to issue 12 actions that currently do not have an EO 13771 designation—many of which are likely to end up being regulatory actions.[4] For instance, we previously commented that DHS’s proposal to eliminate its International Entrepreneur Program should be classified as an EO 13771 regulatory action.

Other substantive agency priorities among the list of active economically significant rules include changes to: 1) transfer programs (USDA plans to issue 5 rules modifying its Supplemental Nutrition Assistance Program and HUD plans to issue a rule expanding verification requirements for several of its covered programs), 2) energy conservation standards (including Manufactured Housing, Furnaces, and Commercial Water Heating Equipment), and 3) the regulation of tobacco (with HHS planning to modify standards for flavors in cigars and implement an increase in the minimum age of sale for tobacco products from 18 to 21).

[1] According to Executive Order 12866, an “economically significant” regulatory action is one which has “an annual effect on the economy of $100 million or more or adversely affect in a material way the economy, a sector of the economy, productivity, competition, jobs, the environment, public health or safety, or State, local, or tribal governments or communities.”

[2] Based on OIRA’s latest guidance, more actions are likely to count as EO13771 “deregulatory” actions than “regulatory” actions. For instance, an action only counts as a “regulatory” one if it a significant regulatory action as defined in Section 3(f) of EO 12866 and that imposes total costs greater than zero. For a more in-depth explanation, see our report on EO 13771 accounting.

[4] A complete list of economically significant actions in the Spring 2020 Unified Agenda that are currently not designated as either “regulatory” or “deregulatory” actions is available in PDF and Excel form.