For decades, administrations of both parties have relied on the Office of Information and Regulatory Affairs (OIRA) to conduct centralized review of Executive Branch regulations. President Obama observed that OIRA offers a “dispassionate and analytical second opinion” on agency actions. Given this bipartisan recognition that review by OIRA is important for ensuring the quality of regulations, it may be surprising that its staffing has declined since it was formed in 1981, while regulatory agency staff and budgets have increased. The George Washington University Regulatory Studies Center recently released its 2017 Regulator’s Budget, which reveals the continued trend of staff and budgetary growth for most federal agencies while OIRA is left behind. This trend has implications for the quality of review that OIRA can perform.

OIRA’s Role in the Regulatory Process

Housed within the Office of Management and Budget (OMB), OIRA is responsible for regulatory oversight of proposed and final federal agency rules deemed significant under Executive Order 12866. OIRA is tasked with coordinating regulatory policy, improving the quality of agency analysis justifying the need for a regulation, and ensuring that regulations are in line with the President’s priorities. Every president since Reagan has given the office responsibility for ensuring regulations’ benefits justified their costs to society (to the extent permitted by authorizing statute).

The OIRA review process involves examining regulations against E.O. 12866 requirements. For economically significant rules, those expected to have an annual effect on the economy of $100 million or more, the review process is especially demanding because OIRA must scrutinize the quality of the agency’s Regulatory Impact Analysis (RIA).

Since OIRA was established in the early 1980s, our Regulator’s Budget data reveal that the staff and budget resources allocated to regulatory review have decreased, yet the responsibility for oversight has expanded. While the full-time staff of regulatory agencies has grown 96% since 1981, OIRA staff has declined by 33%. Budget changes for OIRA have also been much lower than for all regulatory agencies since 1981. The total regulators’ budget has multiplied 8 fold while OIRA’s budget is only 1.5 times what it was in 1981. In the coming year, the requested percentage increase in OIRA’s budget is less than half that expected of all regulatory agencies. 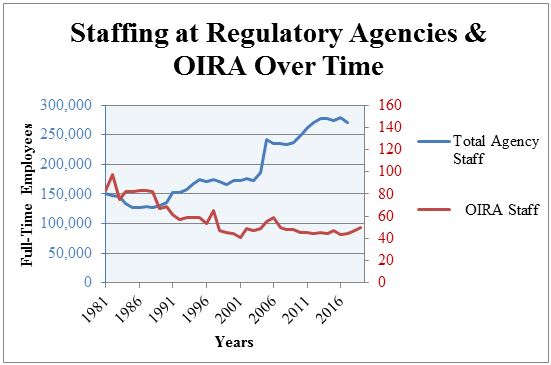 Increases in regulatory agencies’ budgets and staff are of particular concern for OIRA. Recent data indicates a strong correlation between regulatory agency budgets and employment and regulatory output. This means that as regulatory agencies are growing, OIRA has to work increasingly harder to provide the same quality of oversight of more regulatory output. This observation is especially relevant because research shows the Obama administration has already issued more economically significant rules than the past two presidential administrations. Additionally, with Election Day approaching, rule submission is expected to surge as the current presidency comes to a close on January 20, 2017. These circumstances tend to have a significant impact on the review process.

The regulator’s budget projections and impending midnight regulations could mean an even greater strain on OIRA’s staff in the near future. The implications of this situation include lower quality analysis of proposed rules. Some suggest as much as doubling OIRA staff could prompt worthwhile improvements to the review process. Ultimately, the concern is that stagnant allocation of OIRA staff and budgets could result in promulgation of inefficient regulations that are costly to society.