On Wednesday, the Office of Information and Regulatory Affairs (OIRA) released its annual Regulatory Plan and semiannual Unified Agenda of Regulatory and Deregulatory Actions. It also marks the last Agenda to be published under the Trump administration. The contents of the Fall 2020 Agenda are likely to be of interest to much of the public—including members of the incoming Biden administration looking to perform a regulatory reset and begin implementing their own policy priorities.

On Wednesday, the Office of Information and Regulatory Affairs (OIRA) released its annual Regulatory Plan and semiannual Unified Agenda of Regulatory and Deregulatory Actions. It also marks the last Agenda to be published under the Trump administration. While the Regulatory Plan contains statements of agency priorities for the upcoming year, these may soon change given that the Biden administration is unlikely to continue the deregulatory efforts of Executive Order 13771. Notably absent are the Regulatory Reform Results for Fiscal Year 2020 detailing individual agencies’ performance under EO 13771, although the Introduction to the Regulatory Plan offers some topline estimates.

The Unified Agenda contains all actions currently in development at federal regulatory agencies, and this Agenda includes numerous “midnight” rules that agencies are racing to finalize before the next administration is sworn in on January 20. Since President Trump took office, the Agenda also classifies actions as either “regulatory,” “deregulatory,” but numerous rules fall outside of the order’s accounting requirements. The contents of the Fall 2020 Agenda are likely to be of interest to much of the public—including members of the incoming Biden administration looking to perform a regulatory reset and begin implementing their own policy priorities.

Actions in the Agenda are divided into their respective stages of development including: active (those where the next action is expected to occur within the next 12 months), long-term (those beyond the 12 month window), and completed actions (which includes rules that were either finalized or withdrawn since the last Agenda was published). Approximately 17% of the 2,652 active actions listed were published for the first time in the Fall 2020 Unified Agenda.

Compared to the Spring 2020 Agenda, the total number of actions decreased slightly from 3,939 to 3,852. At first glance, the most interesting topline figure is the increase in the number of economically significant actions underway now (174 listed in the current Agenda) over the Spring 2020 Agenda (149). However, a closer look reveals that the entire difference (25 actions) are interim final rules being undertaken by the Small Business Administration implementing different aspects of the Coronavirus Aid, Relief, and Economic Security Act’s (CARES Act) Paycheck Protection Program. Nonetheless, 149 economically significant rules in the works at this stage of the administration is still notable when compared to President Obama’s midnight regulatory agenda, which contained 113 active economically significant rules. A large volume of last-minute rulemakings might be one reason to expect a particularly chaotic midnight period. 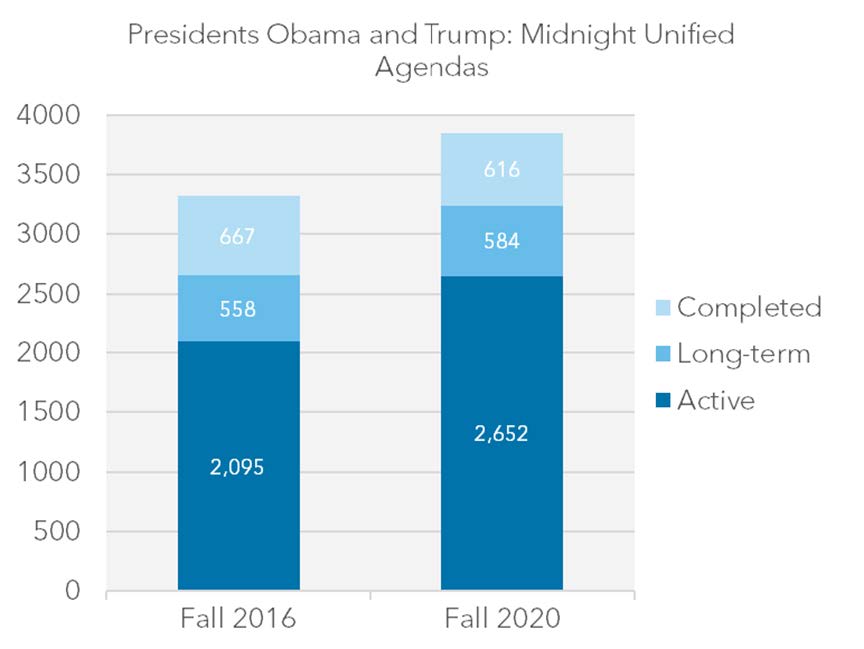 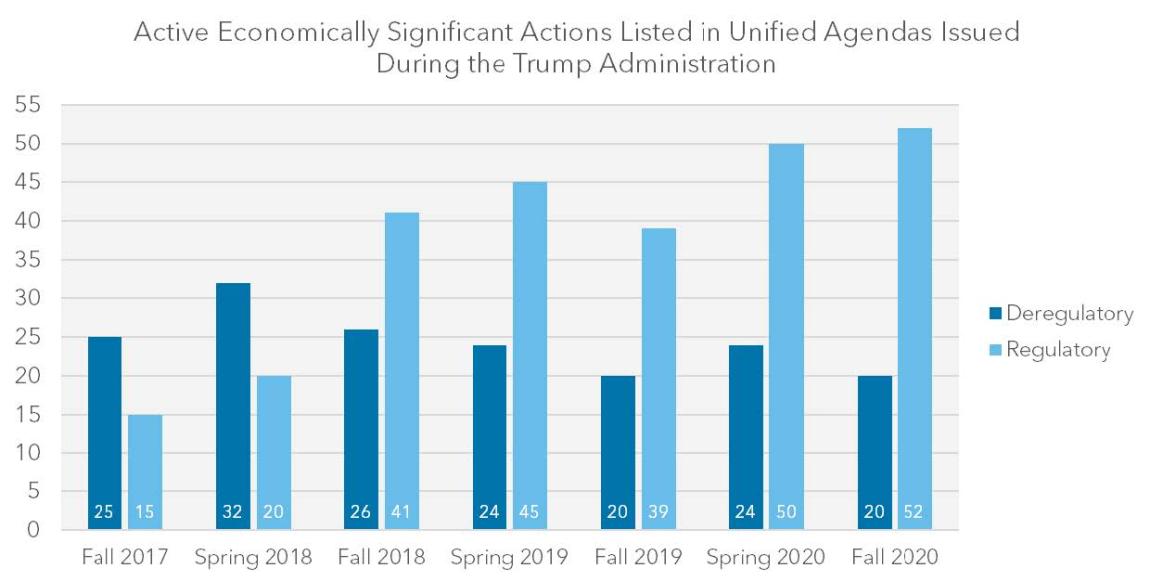 Economically significant actions provide a particularly useful measure of an administration’s regulatory output, and a look at the agencies with the largest number of planned active actions provides insight into the Trump administration’s midnight policy priorities. The Department of Health and Human Services (HHS) is an outlier—with 42 economically significant regulations. This number is primarily the result of routine regulations issued by the Centers for Medicare & Medicaid Services (CMS). Apart from HHS, the U.S. Departments of Agriculture (USDA), Homeland Security (DHS), Labor (DOL), Transportation (DOT) stand out in terms of their planned number of economically significant rulemakings. 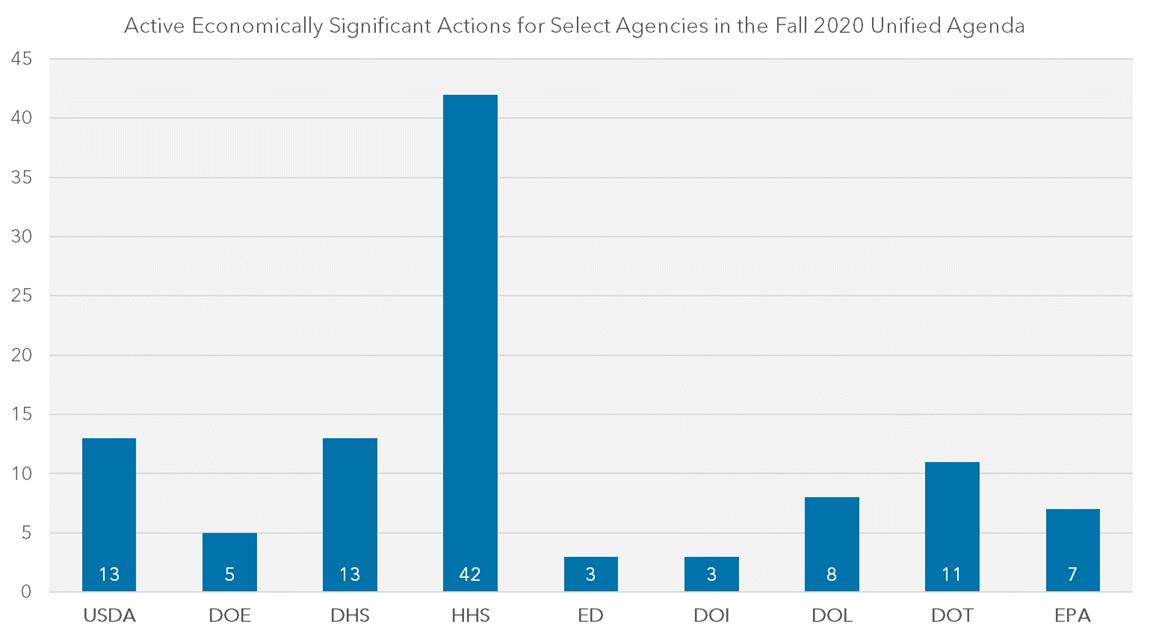 Half of the actions listed by USDA involved changes to its Supplemental Nutrition Assistance Program (SNAP). The DOT and Environmental Protection Agency (EPA) economically-significant rulemakings include a mix of regulatory (12) and deregulatory (5) actions—mostly related to the environment. Almost half of DOL’s biggest actions and just about all of DHS’s most costly actions are related to increasing the stringency of immigration-related regulations which continues to be a policy priority for the Trump administration.

Several of these immigration-related rulemakings exemplify the potentially problematic characteristics of midnight regulations that often apply to last-minute rules. For example, some of my colleagues and I submitted public comments to DHS on its Collection and Use of Biometrics and Affidavit of Support on Behalf of Immigrants rulemakings—both of which fall short of existing executive branch rulemaking guidelines. For instance, they had unusually short comment periods (30 days instead of 60), and in both cases the agency shortchanged the quality of regulatory analysis supporting the proposal. Ultimately, the rush to finalize rules before January 20th could result in several rules with procedural deficiencies—making them potentially more vulnerable to legal challenges (i.e., increasing the likelihood that they will be overturned in court).

[1] According to Executive Order 12866, an “economically significant” regulatory action is one which has “an annual effect on the economy of $100 million or more or adversely affect in a material way the economy, a sector of the economy, productivity, competition, jobs, the environment, public health or safety, or State, local, or tribal governments or communities.”

[2] Based on OIRA’s guidance, more actions are likely to count as EO13771 “deregulatory” actions than “regulatory” actions. For instance, an action only counts as a “regulatory” one if it a significant regulatory action as defined in Section 3(f) of EO 12866 and that imposes total costs greater than zero. For a more in-depth explanation, see our report on EO 13771accounting.